Wrigley Field Renovations: Joe Maddon has seen it all during his nearly five seasons as manager of the Chicago Cubs. Say what you will about the Ricketts family and their politics, but they have delivered as promised since purchasing the franchise in 2009: a World Series-winning product and a vastly improved Wrigley Field.

It wasn’t that long ago during the 2015 National League Championship Series that Maddon conducted his twice-daily media conferences in what amounted to a cave. That room was  well within the bowels of the now 105-year-old ballpark on Chicago’s northside once dubbed by the Tribune Co. as “the friendly confines.”

I’ve been attending games at Wrigley since 1974, and if you dropped me down on Addison and Clark Streets for the first time, I’d swear the new ballpark is a fabulous facsimile, not the old one.

That’s how good it is.

“I think the Cubs did a fantastic job with this place,” said Gabe Kapler, the second-year manager of the Philadelphia Phillies, whose club split a just-concluded four-game series at Wrigley this week. “Every time we come back it’s nicer and nicer. The amenities are better and better. But it still maintains the feel of Wrigley Field, you know?”

To be sure, there need to be some tweaks.

The four video boards are stocked with too much-scattered information. And if you’re seated behind the plate, the only access to balls, strikes, outs, and the line score is on the “iconic” old hand-operated green board high above center field.

The numbers are too small to read, and in fact, unless one can add up runs on the line score, there’s no way of knowing what the actual at-the-moment score is of the game at hand. The same can be said about out-of-town scores.

Electronic strip boards on the facing of the upper deck are readable only if you’re seated down the lines.

In the magical restructuring of the upper deck where the ingress and egress were once perilous, box seats were raised a couple of inches for a better view. Problem is, there are no handrails going up and down the steep steps, making those steps tough to descend, particularly with a couple of drinks in each hand. It’s a disaster waiting to happen.

And though the project began with large scale repair to the steel and crumbling concrete infrastructure, the poles that hold the roof and decks in place are very much still in evidence – just like they were when the old yard opened in 1914.

How has Wrigley Field changed?

1923: By then the ballpark was known as “Cubs Park”; new owner William Wrigley increased the seating capacity to 30,000 by separating the grandstand into three parts, and moving the center section from behind home plate back toward the corner of Clark and Addison.

The ballpark became known as Cubs Park in 1920 after the Wrigley family purchased the team from Weeghman. It was named Wrigley Field in 1926 in honor of William Wrigley Jr., the club’s owner.

How much of Wrigley Field is original?

To further explore what is original and what isn’t here is a brief renovation history of Wrigley Field. When first constructed by Charlie Weeghman and Zachary Taylor Davis in 1914, the stadium was a 14,000 seat single grandstand. 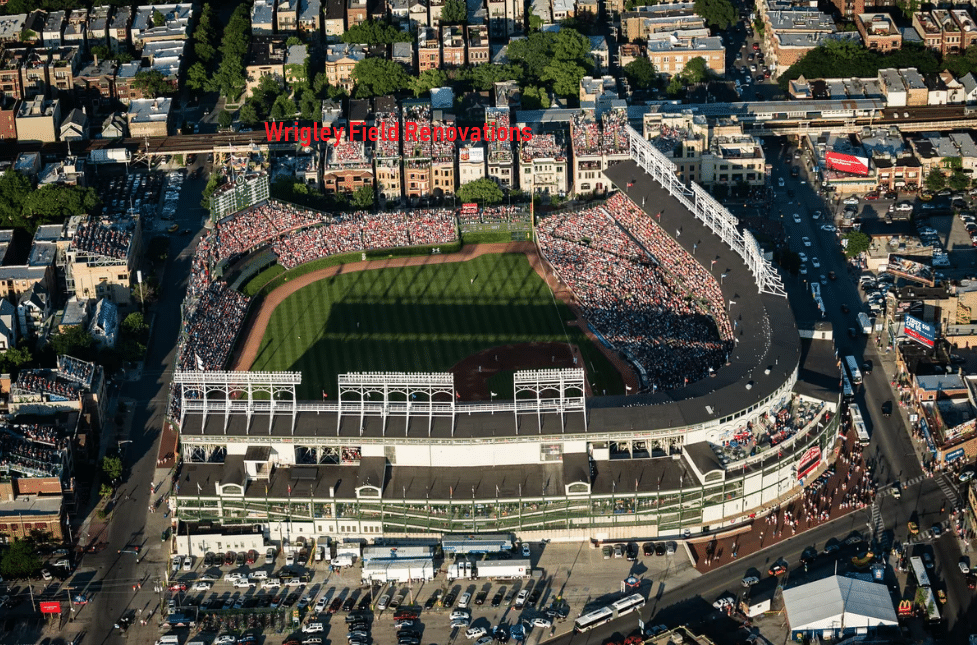 Wrigley Field Renovations Before And After

There isn’t much construction news at Wrigley Field these days, but certain things about the 1060 Project that weren’t completed at the beginning of 2019 are now being wrapped up.

The right-field corner of the ballpark at Addison & Sheffield had been boarded up, with boards painted green, when the season opened.

Now, as you can see in the photos above taken by BCB’s David Sameshima on Monday, the boards are gone and from the street, you can see large windows. This area is described at wrigleyfield.com:

Due to ongoing construction in this area throughout the season, the club will not be available in 2019. The new space, which is scheduled to be completed in advance of the 2020 season, will feature an enhanced design and elevated food and beverage offerings while continuing to deliver best-in-class service. We will share additional details as they are finalized in the coming year.

So that’s what we are probably looking at — new food and beverage space, likely open to the public. As you might recall, there was a space similar to this on the lower level in the right-field corner, called at times the Sheffield Grill or Decade Diner. That area is now open and has concession carts, currently hosting the Chef Series (which Sara Sanchez will review later this week).

You’ll also note in photo 1 the new dormer above the upper deck (that’s the cover to the ramp where people walk up to or down from the upper deck) is not quite finished, but it will be soon.

Also included in the photoset above are two photos of the tribute the Cubs made to the late Bill Buckner before Monday’s game, first, a photo on the video board, then the board went to black while a moment of silence was observed. That was followed by a warm round of applause for Billy Buck, a nice gesture from the Cubs.

Prior to 1980, the rooftops provided a vantage point and were a gathering place for free views of the ongoing Cubs games. Since the observers were a few dozen people watching from the flat rooftops and windows of the buildings, with “seating” consisting of a few folding chairs, there was the little commercial impact on the Cubs. When the popularity of the Cubs began to rise in the 1980s, formal seating structures began to appear, and building owners began charging admission; Cubs management became concerned about lost revenue and controlling their copyrights. In 2002, the Cubs filed a lawsuit against various rooftops for copyright infringement. In 2004, 11 of the 13 roofs settled with the club, agreeing to pay 17% of gross revenue in exchange for official recognition through 2023. With the Cubs and the rooftop owners reaching an agreement, many of the facilities erected permanent seating structures. By 2014, 15 of those buildings’ structures that were once residential apartments had evolved into rooftop businesses with multi-level facilities.

Before work on the project began, the team attempted to head off legal action from rooftop owners by offering to reduce the size and number of signs to be built, in order to gain their assent. Unable to reach an agreement with the rooftop owners as renovations began, the Cubs said that they would pursue the original 2013 plan to modify the park. Although some rooftop owners pursued legal action, courts ruled against them. By 2018, the Ricketts family-owned 11 of the rooftops, operating them as Wrigley Rooftops, LLC.